RHA is an average amount of milk produced by the average cow in the herd for the last 365 days.

ME 305 is an expected total milk production for each cow through a 305-day lactation, and subsequently adjusting the total projected milk to standardize for parity, age, season of calving, and number of times milked per day. ME 305 better reflects seasonal changes compared to RHA.

MLM standardizes every cow 305 days or less since her last calving, to a second lactation cow, 150 days in milk with a 4.0% fat and 3.3% protein. MLM should be used for short-term comparisons.

Pregnancy rate is the percentage of cows becoming pregnant out of all eligible cows to be bred, within a time frame. 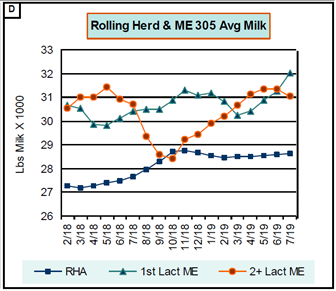 ME 305 of primiparous cows remained consistent. RHA did not reflect any decrease in milk production.

Average MLM decreased starting on June until September. Compared to average MLM of June, milk production from July to September decreased about 8 pounds (range of 5 to 12.5 pounds) per cow per day. In the figure below, MLM was trending up until May and then dropped. It might be possible that heat stress has caused this drop in production. When looking at this block, farmers should expect upward trends in MLM. 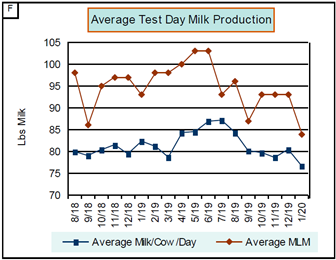 Loss of milk components, such as fat, is very typical when cows are experiencing heat stress. In the figure below, milk fat depression started in May, and lasted until September. Losses were about 0.35 (range from 0.10-0.57) percentage points per month starting on June-September when compared to percent fat in May. Remember that milk fat varies depending on when (AM or PM) plants conduct monthly testing.  Fat is higher in the morning and you need to keep that in mind when reading your DHI report. 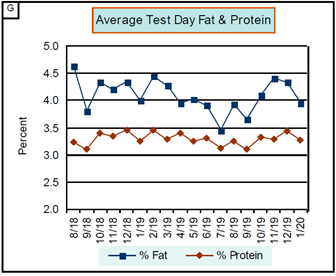 In the upcoming figure you can see a decrease in pregnancy rates during warmer months compared to colder months. The lowest pregnancy rate was observed on July 30, which was 10 percentage points lower than in March. Again, this is a textbook example of the potential impact of heat stress on reproduction performance. 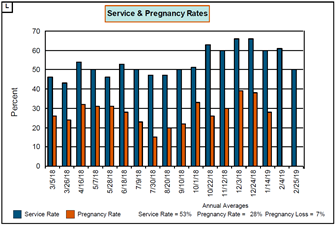 The economic impact of heat stress is large. Following the information extracted from the Herd Summary, it is possible to estimate the potential losses.

Considering a price of $2.68 per pound of fat, 0.35% milk fat depression (Block G) represents a reduced price received for milk sales of $0.938 per hundredweight due to heat stress during warmer months.

A decrease of pregnancy rate from 35% to 25% (Block L) would represent a loss of $7.90 per cow in the month of July compared to the month of May (https://dairymgt.info/markov/reader.php).

UW-Madison Division of Extension specialists and county educators provide information on best practices to prevent heat stress in both animals and humans. This article and video series provides tips to prepare for and manage the challenges of warm weather. See all articles and videos.

We teach, learn, lead and serve, connecting people with the University of Wisconsin, and engaging with them in transforming lives and communities.

Connect with your County Extension Office »

Find an Extension employee in our staff directory »

Feedback, questions or accessibility issues: info@extension.wisc.edu | © 2023 The Board of Regents of the University of Wisconsin System
Privacy Policy | Non-Discrimination Policy & How to File a Complaint | Disability Accommodation Requests

An EEO/AA employer, University of Wisconsin-Madison Division of Extension provides equal opportunities in employment and programming, including Title VI, Title IX, the Americans with Disabilities Act (ADA) and Section 504 of the Rehabilitation Act requirements.